Following a good pub lunch at the inn of the same name, we entered a side door and were led to a conference room where our host introduced a jovial former Prince Rat who told us of the organisation’s history. He went on to mention many well known names of the entertainment world who support the organisation as well as describing its charitable activities. Then to the museum with so many artefacts ranging fro Tommy Handley’s violin, Max Mille 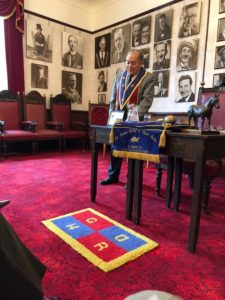 r’s loud check suit and Tommy Cooper’s fez with much more besides. Then back to a coffee room for a video and refreshments. a thoroughly good day.

A beautiful sunny Summer’s day and a group of members of the Surrey Hills Gliding Club welcomed our group of nine to Surrey’s Kenley Airfield. With several pilots and two Grob gliders at our disposal we looked forward to an afternoon of unaccustomed experiences.

Each flight was launched into the air by a winch-driven cable and as the thermals were located and taken advantage of we banked and soared over Coulsdon, Whyteleafe and Caterham. Visibility was excellent and we could see Heathrow, The O2 Dome, Gatwick and all points between. A truly exhilerating experience.

A guided tour of The Charterhouse

The story goes back a long way – to 1348 in fact. The original monastery was built on land outside the City walls, used to bury victims of the black death. With the dissolution of the monasteries, a mansion was built on the site, owned by a philanthropist, Thomas Sutton, who built alms houses and  school that was to become the famous Public School. The school is no longer on the site, having moved

to Godalming in Surrey, in 1872. Old boys, known as ‘Old Carthusians’ include Thackeray and Baden Powell who inter alia are commemorated by wall plaques.

Our tour included the Chapel with Thomas Sutton’s monument, the Entrance Hall, the Library and the Great Hall. We were also shown the Great Chamber, visited by Queen Elizabeth the First and many other notable persons. 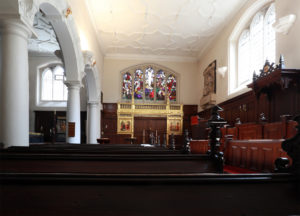 A guided visit to Dulwich College

The founder of the College was Edward Alleyn, a famous actor/manager, for whom Christopher Marlowe wrote his leading roles. Edward Alleyn derived most of his wealth from places of entertainment and Bear Gardens. He purchased the 70 acre manorial estate of Dulwich for £35,000 in 1613. It was then he conceived the idea of setting up a college or hospital for poor people and the education of poor boys. This charity originally consisted of a Master Warden, four Fellows, six Poor Brothers, six Poor Sisters and twelve Poor Scholars (orphans were admitted from the age of six years). His original buildings survive adjacent to the College Chapel in the middle of Dulwich Village. 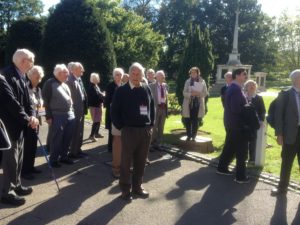 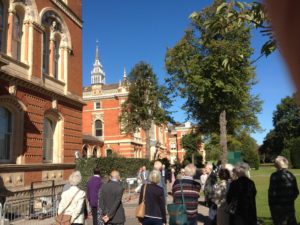 Our guide, the College Archivist, first invited us to view the main building, completed in 1866. The architect was Charles Barry Junior (the son of Charles Barry the architect responsible for the Palace of Westminster and many other prominent 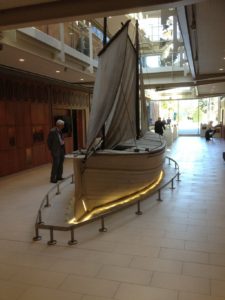 We were shown the relatively new science block where the restored James Caird, the sailing lifeboat used by Sir Ernest Shackleton (who led three polar expeditions to Antarctica). This lifeboat, in an epic voyage to South Georgia, saved Shackleton’s life and those of his expeditionary crew following the loss of his ship, the Endurance, which was crushed by Polar ice. 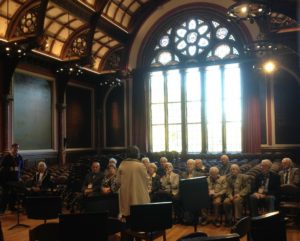 Our guide took us to the Great Hall and finally to the Archives room where there were many interesting items, including a copy of the original Letters Patent, press cuttings, and the variety of uniforms and caps and blazers for scholars, boarders and sports team members.

The museum gave a well illustrated history of our mail service from its early beginnings in the reign of Henry VIII, the development of mail coaches in the late 1700s and postage stamps in the 19th century. Its progress in distributing mail is symbolised by a collection of road 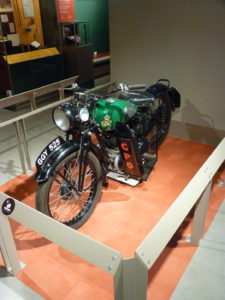 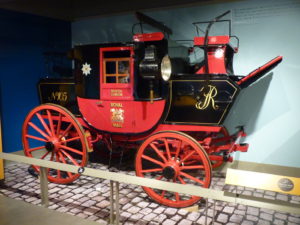 vehicles and the dedicated narrow gauge underground railway with loading and unloading stations under much of central London. These days the ‘Mail Rail’ is no longer used for its original purpose but provides visitors with an interesting ride with projected film history at each station stop. 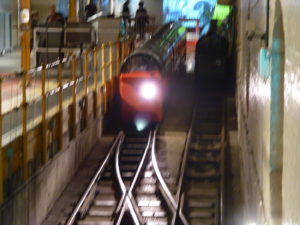 The museums also illustrate the introduction of mail trains, telegrams and the telephone with examples of each phase including switchboards. Also referred to is the Post Office link with short wave radio communication and its leading to Radar. All in all, a great trip.

Almost all the riverboat operational personnel belong to the Company of Watermen and Lightermen, founded in 1514. Their headquarters is a fine Georgian building situated in St. Mary at Hill in the City of London, not a stone’s throw from The Monument. The Company assists in the training of apprentices whom are eligible to compete in what is believed to be the oldest continuously held race in the World – a rowing race which was first raced in 1715. The prize is the right to wear Doggett’s Coat and Badge. The coat is a scarlet frock coat designed in the 18th century and the badge is a decorated silver badge worn on the upper left arm.

After a good pub lunch at the Mawson Arms, at 2pm we met Guide, Dave, a former maths teacher who took us round the extensive premises. Fuller’s claim to be the oldest UK brewery still in production, having been founded in 1654 ad. We sampled differently roasted barley grains and were told of the way in which tapwater is de-chlorinated and mineralised with gypsum to provide the optimum flavour. We saw the huge mash tuns in which the barley is steeped in hot water to make ‘wort’ which with the addition of hops and yeast is fermented until it becomes beer. The yeast grows in quantity during fermentation and is later separate 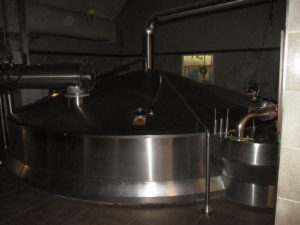 d, being transferred to a factory elsewhere to become Marmite. After separation of the wort, residual grains are shipped out to farms as cattle feed. Nothing is wasted.

By far the largest volume of beer made at the brewery is ‘London Pride’ a premium draft beer. This is transferred to stainless kegs which a robot transfers to and from conveyor belts for loading on the road distribution vehicles. The remainder of the production is in the form of several bottled beers, IPAs, Porters and several other specialities. The tour ended in a sampling room where the different beers could be sampled and their tastes compared. A great day out!!! 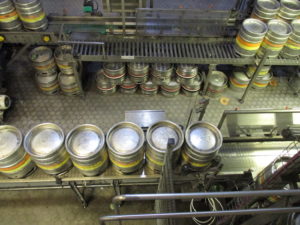 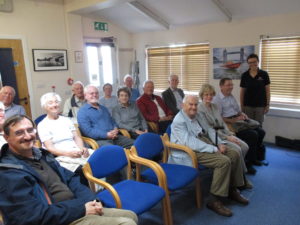 Volunteer, Jill introduced our party of 17 to the work of the busiest station in the UK and Ireland. She described the work they undertake , types of events requiring ‘a shout’, the equipment and boats at their disposal and she then went on to introduce us to Nick. Also a volunteer, Nick showed us the lifeboatman’s clothing, safety devices and he went into the details of the 50mph rigid hull, water jet propelled rescue boat, its communications, radar and life saving facilities. A two hour afternoon flew by and all agreed that we had had a most interesting visit. 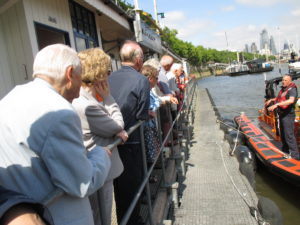 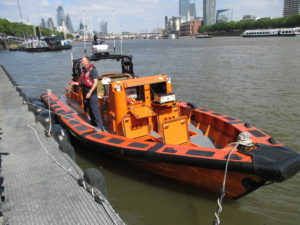 Sunshine greeted us and our guides Chris and Peter on the 31st of July. We were given a very interesting introduction to the Ground’s history. From market garden to cricket field for local clubs and then to the home of Surrey County Cricket Club. Not widely known but the land is owned by the Duchy of Cornwall. We toured the huge pavilion,with its ‘Long Room’, a museum of bats, balls, protective clothing and signatures of cricketers from all nations. Then to the huge new stand with its roof terrace and wonderful views of the ground and much of the London skyline. Altogether a wonderful 2-hour visit. 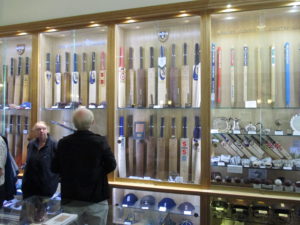 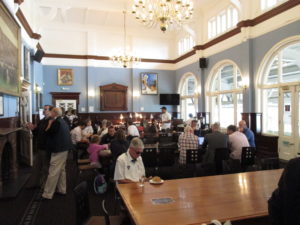 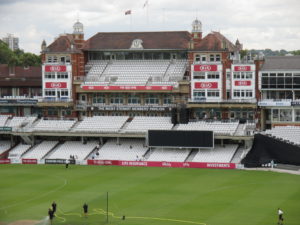 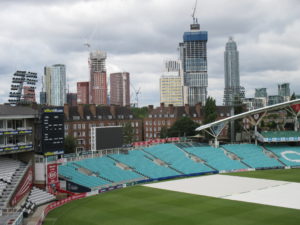 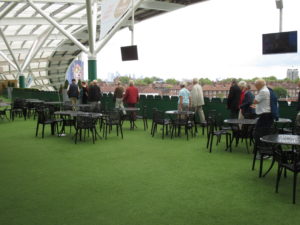 Our Past Chairman and his Wife welcomed a sizeable turnout to this historic church in the attractive Kentish countryside with coffee and biscuits.

They went on to present us with a carefully chosen repertoire of organ music which also included two pieces in which they accompanied a trumpet soloist. Although of Norman origin, the church has bee rebuilt twice in the 20th century, once due to a nearby V2 rocket and in 1987, a dreadful fire. Following the latter, a new organ was installed and the sound in that beautiful church was really lovely. Following the performances we repaired to ‘the pub next door’ for a most pleasant lunch. 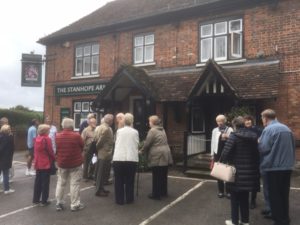 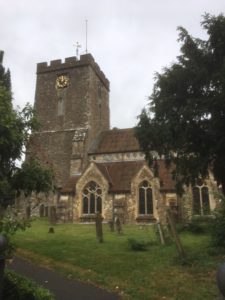 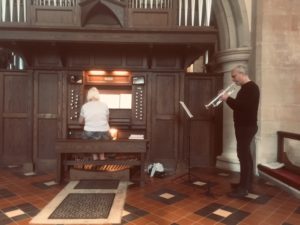 A glorious Autumn morning greeted 27 members of the Club who assembled in The Strand outside the cathedral-like buildings of The Royal Courts of Justice. We were split into two groups, each with a well informed and highly informative guide. The Courts are used to settle Civil legal disputes, criminal cases being judged at The Old Bailey.

Our guides described the history and building of the Courts and the facilities provided for judges and for barristers and their staffs. We were taken into one Court and the organisation of a trial described. All-in-all it proved to be a most interesting visit. 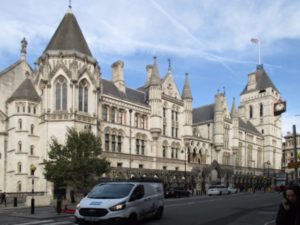 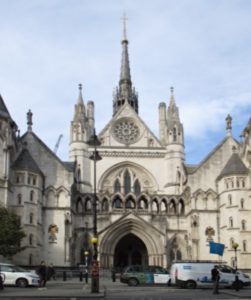 This small, late 17th century house is a museum of Hogarth’s life. It houses his clothing and footware, the tools of his brilliant trade as an engraver and prints of much of his body of work. His subjects are the ills of society, drunkenness, gambling and prostitution and the degradation they produced. Among his friends was Thomas Coram of Islington, who founded the Foundlings Hospital for the care of abandoned children. 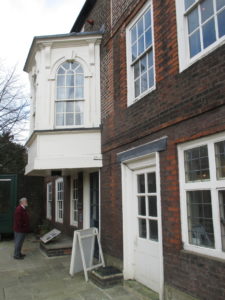 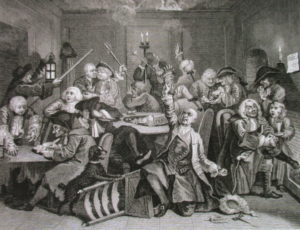